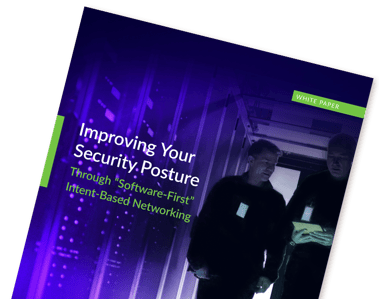 With security being of paramount concern, organizations should build their infrastructures with security as a top priority. By taking a “software-first” approach and deploying Intent-Based Networking, organizations can make quick progress in terms of their security posture by avoiding some of the most common causes of security mishaps - including lack of visibility, lack of consistency and uniformity, lack of accountability, and inability to resolve problems quickly when they arise.

Download and read this paper to get the details on how Apstra's Intent-Based Networking can dramatically improve organizations’ security posture. This is in addition to Intent-Based Networking’s proven benefits in delivering an order of magnitude acceleration in business velocity, an order of magnitude improvement in infrastructure reliability and an 83% reduction in costs.

Fill out the form to continue reading the white paper.

You may have read in the news about horrific security gaps that have the potential of bringing down whole infrastructures, leaking critical business and personal data, and exposing organizations to massive liability.

There is no question that improving organizations’ security posture is a critical requirement for infrastructure and security teams.

While there are thousands of security point solutions addressing specific security threats, it is important that infrastructure teams are also diligent and implement approaches that, at the foundational level, enforce the level of discipline and hygiene required to maintain a good security posture. With that in mind, “Software-First” Intent-Based Networking can offer organizations significant improvements to their security posture. This white paper explains why.

Without a single source of truth

Most organizations today do not have a single source of truth to capture the intent of their infrastructure. Intent is captured across various systems, in some cases spreadsheets and documents. The lack of a single source of truth for intent means there is often a deviation between what the architect originally intended, and what is actually implemented in the network. Changes are made to these networks over time and often documented by individuals who may no longer be at the company. We see so many operators worry about “touching anything” because they don’t know what’s there. For example, network engineers fear removing or changing access lists because they don’t know why they are there in the first place.

Needless to say, this situation creates an environment which can introduce dangerous security vulnerabilities that are easily exploited.

Different domains are operated by multiple organizations using different systems within the same company. In some cases, the systems in place are completely manually operated. In other cases, there may be a software defined layer that controls some aspect of the security policy, while connectivity is managed by some other systems.

As a result, there is no consistent method by which an operator can enforce one uniform set of security policies across more than one domain, let alone across all their domains. In fact, blatant gaps exist in today’s environments.

For example, you may be able to enforce security policies over your virtualized environment, but it can’t extend to bare metal servers or storage arrays. Operators are forced to program these policies manually, which is error prone. These gaps create dangerous security vulnerabilities.

Even if you had control of those domains, and think you pushed the correct configurations, there may be bugs in hardware or the device operating system that prevent the configuration from taking effect. Unless you have an ability to test your configuration actually worked, and that your security policy has been applied, you are still at risk.