A Next-Gen Vision for the Next-Gen Network 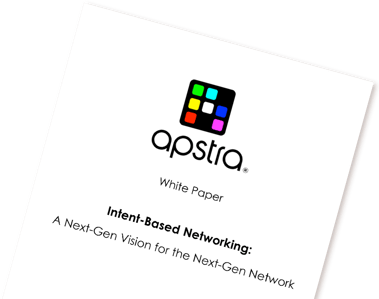 Costs directly attributable to network and service operations currently amount to almost 30 cents of every revenue dollar, while CapEx represent only 17 to 20 cents. Investing in service lifecycle process automation can reduce OpEx costs by about 7 cents — 37% of the total CapEx budget today. According to studies by CIMI Corporation’s Tom Nolle, that offers a return on investment that’s 25 to 40 or more times than offered by transforming infrastructure to SDN and NFV.

This in-depth white paper explains how service providers are capitalizing on Intent-Based Networking — a new and effective networking model that provides a way of abstracting an application, feature, network, or resource in such a way that the intent is exposed, but the implementation is hidden.

Discover the next-generation autonomous networking technology that is designed from top to bottom for the present and the future.

Get the white paper

About five years ago, network operators worldwide started to recognize an alarming trend. Revenue per bit, driven by factors like competition, consumer broadband, and Internet pricing and settlement, was falling faster than cost per bit. They calculated that at some point between 2017 and 2019 the two curves would be too close to allow a reasonable return on infrastructure investment.

Operators had three broad strategies to resolve this, all part of plans they called “transformation”. For the short term, they planned to put pricing pressure on current projects and defer spending. For the middle term, they proposed to explore new technology options to reduce operations costs, and in the long term they looked for a shift from basic connection services to hosted experiences to improve revenue. The short-term strategy is in play today, already reducing network vendor profits.

Progress toward the mid- and long-term goals seems stalled. Initiatives like software-defined networking (SDN) and network functions virtualization (NFV) have had limited and local success but have failed to improve operations efficiency and reduce OpEx on a broad scale. Without agile, efficient, operations, hosted experiences and agile responses to OTT, competition is out of reach. What network operators need is something to address these barriers to achieving both mid-term and long-term goals, and that’s what Apstra is providing.

Costs directly attributable to network and service operations currently amounts to almost 30 cents of every revenue dollar, while CapEx represents only 17 to 20 cents. Investing in service lifecycle process automation can reduce OpEx costs by about 7 cents. According to studies by CIMI Corporation’s Tom Nolle, that offers a return on investment that’s 25 to 40 or more times than offered by transforming infrastructure to SDN and NFV.

That operations savings can then help fund the infrastructure transformation operators find credible, including the hosted-service initiatives that will drive revenue in the future. In fact, it could even take some CapEx pressure off in the near term. Seven cents per revenue dollar is 37% of the total CapEx budget today. You could buy a lot of carrier cloud technology with that. Apstra’s initiatives have linked services and technology, infrastructure and profits, operations and agility. We provide a bridge to an exciting future, without making it too expensive and risky to cross.